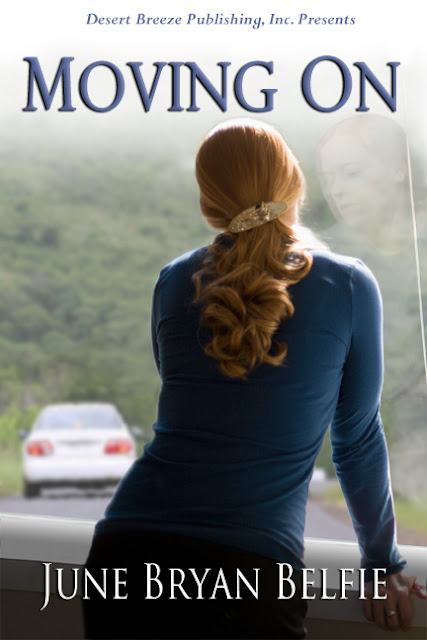 A Book about moving on after a difficult divorce
MOVING ON
This Christian Romance e-book is now available. May be purchased through Desert Breeze Publishers, Amazon, Barnes and Nobles, and many other book stores.

Here is the first review:


Fran Fernandez () - See all my reviews


This review is from: Moving On (Kindle Edition)


Moving On, by June Bryan Belfie is a good read. She brings her characters to life with her words, and by their reactions to the hard places that come to all of us. You'll fall in love Laura, and feel her heartache at being deceived, and then heartlessly dumped for the perpetual younger woman. The book shows the reality that being a Christian doesn't exempt you from the trials of life, but that you have God's resources of grace, strength, peace and wisdom in the midst of them. You will see and understand how divorce not only tears the heart apart, but family too. In the midst of attempting to begin anew, other people, and situations arise to challenge Laura and her teenage daughter, that moving on can be a mountain to climb. Throughout--June subtly paints the beautiful restoring hand of God to the places of bruising. I won't tell much more. You'll have to read for youself and be blessed.

5.0 out of 5 stars Sensitive and thought provoking,
By
Jill Poyerd - See all my reviews
This review is from: Moving On (Kindle Edition)
I really loved this book! The author does a great job of weaving the storyline together, and she handles the character's situations with sensitivity as well as a touch of humor. I'm not divorced, but the way Ms. Belfie conveys the pain and struggles of going through such a change in life is powerful and gives me a new appreciation for those who do. It's a book that catches you, puts you through the ringer, but leaves you with hope. It was hard to put down...I highly recommend it!

This is the story of a Christian woman with a teen-age daughter trying to find her way after her husband divorces her. It's the story of her personal struggle as she leans on God for answers.

She meets her friend's cousin, Len, a widower unable to let go of his past. An illness brings her ex-husband, who is a doctor at a local hospital, back into her life. But will she ever trust him again? Does he even want her back? Or will an event take place in Len's life to change his future?

His death would have been easier. Laura Barron avoided looking at the burgundy leather armchair as she slipped her mother's crocheted afghan off her shoulders and placed another log on the fire. Laura glanced out the front window as the snow swirled against the window panes and inched its way up the stone steps, already covering the front porch of her nineteenth century Chester County farmhouse outside of Philadelphia. With a sigh, she returned to the sofa vaguely aware of Vivaldi playing softly in the background and opened the editorial section of the Sunday paper. It was already history since it was now Tuesday evening, but between working and caring for her teenage daughter, Kim, she usually found herself behind on reading. It still felt strange to be sitting there alone.

She pictured Dave across from her in his chair reading his latest medical journal. Funny, she thought they were happy -- at least as happy as most of her friends after a marriage of nearly twenty years.

Laura looked up as Kim came down the stairs two at a time. Everything her daughter did and said was quick. Her tongue was as agile as her one hundred-and-ten pound body. She had inherited Dave's dark brown hair and expressive eyes and Laura's fair complexion and slender curves. It was no wonder boys called her all the time. Sixteen was an exciting age, the transition from child to woman.

"Mom, the hem's coming out of my slacks, and I have to wear them tomorrow. Would you be a sweetheart and fix them for me?"

"Mmm, I suppose so, but why can't you wear something else?"

"I have to wear these. They go the best with my new sweater, and I told Lisa I was wearing red so she's planning to wear her red sweater, too." Kim's eyes sparkled with anticipation.

Logical explanation. Laura smiled at her daughter. "I'll do it this time, but I've warned you that you should learn to sew. I'm not always going to be around to do it for you."

"You have to be around, at least till you're ancient. Who else will teach me how to take care of kids and all that stuff?"

Laura laughed and went over to the dry sink where she kept her sewing box. Kim went on chatting about her friends and the upcoming weekend. She told of her plans to go to an indoor skating rink on Saturday with her best friend, Lisa, plus five other girls from school. Lisa was in her class, and they attended the same small non-denominational church in West Chester, where Lisa's father was the pastor.

Kim and Laura had joined the church after the separation, since Dave had remained at their old church as part of the missions committee. Seeing him every week was too much of a strain, and people seemed to treat her differently once they were separated.

Laura watched as her daughter exclaimed over the all-night skate, expressing herself with her hands. She was entertaining and exuberant. That's what kept Laura going after Dave left.

Kim ran upstairs to answer her phone, and Laura's mind wandered again to the past. Why hadn't she seen it coming? Certainly the signs were all there. Perhaps she couldn't admit to herself that she had failed. Failed as a wife, anyhow. Her job was going well, and she'd been

promoted two months before they broke up to assistant vice president. It was a small local bank, but it pleased her that she was rewarded for her efforts.

She should have seen it coming. Dave had joined the gym and went religiously every other morning to work out before heading for the hospital. Then there were the new suits and casual designer clothes. In the past she had to beg him to buy clothes for himself. He even changed from his childhood barber to a 'hair stylist.' She had figured it to be a midlife crisis though he was only forty-four.

Laura first saw Dave during her sophomore year in high school when she and her friends went to the football games. Dave Barron was the star running back, and all the girls had crushes on him. It was five years later that she and Dave officially met. She was home between semesters from Penn State, and he was on his break as a first year medical student at the University of Pennsylvania. They were introduced at a Christmas party of a mutual friend. During school breaks they dated frequently, but their relationship did not develop into romance until her senior year of college.

She recalled the Christmas Eve when he promised to love her forever and placed a solitaire diamond on her hand. Not wanting to be apart any longer, they married the following December during his final year of medical school.

Dave was the only man she ever loved. She'd had crushes, but never knew the real thing until he came into her life. He also became her best friend.

As she hemmed the slacks, she thought back to the months before he left. He began staying late at the hospital, sometimes not arriving home until midnight. She never questioned him because there had always been trust between them

Kim called down the stairs and shook Laura from her thoughts.

"No emergency on those slacks, Mom. School's going to be closed tomorrow because of the storm. I'm so mad."

"I'll finish them anyway, so you'll have them when you need them. How much snow do they predict?"

Kim came back down and plopped herself on the sofa across from Laura, folding her arms. "They thought it might be a foot or more by morning."

"It's nearly a foot already. It's so beautiful. Have you looked out?

"Yeah." Kim frowned and shook her head. "I had my whole day planned, and Lisa and I wanted to go shopping after school. Nothing ever works out."

"It will probably be over by Thursday. Maybe you can go shopping then."

"The sales are only for tomorrow, and I desperately need new jeans."

"Honey, you have at least five pairs in your drawer."

"They're way too big for me. You know I lost five pounds on my diet."

"I know and you're way too thin now. I wish you hadn't done that."

"Thin is in, Mom. You know that. Maybe that's one reason..." Her voice trailed off, and she looked away from her mother. "I have to call Lisa and tell her about school."

word.
Posted by June Bryan Belfie at 9:56 AM 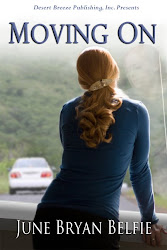 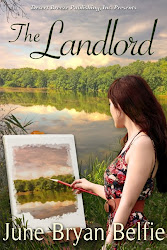 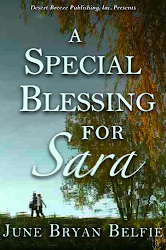 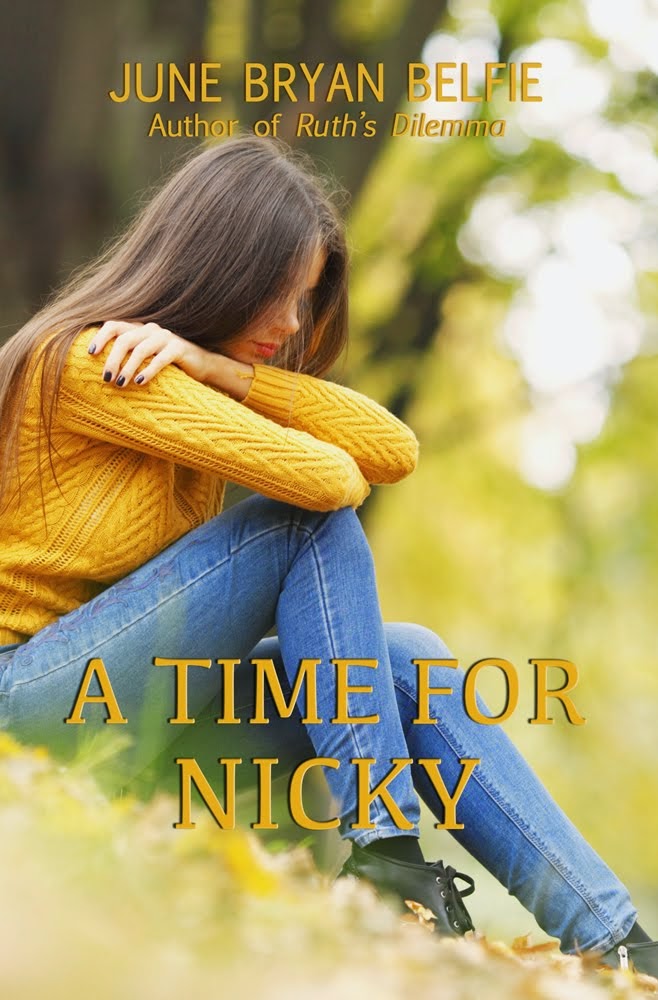 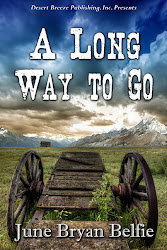 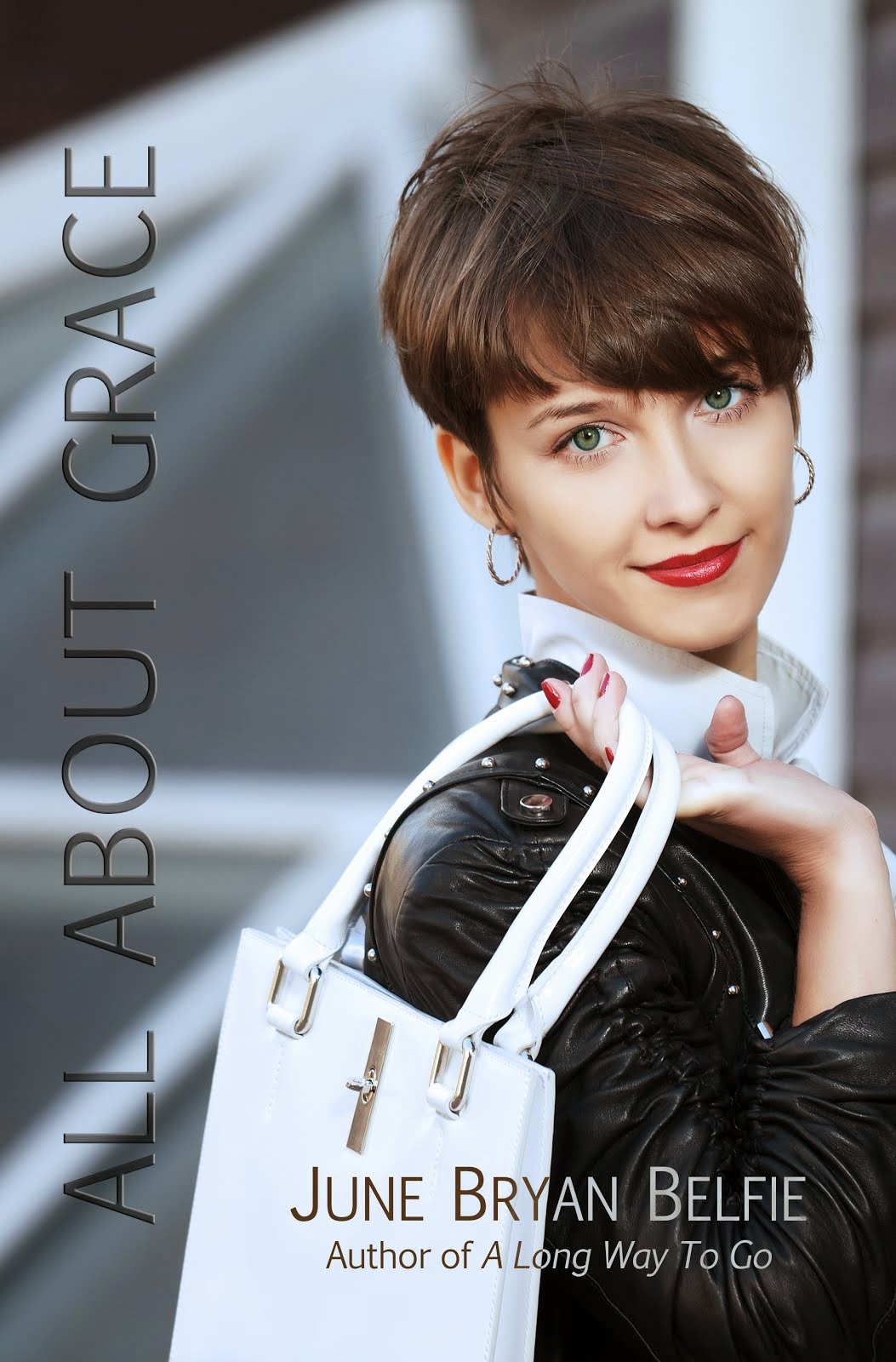 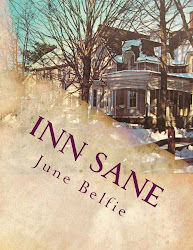 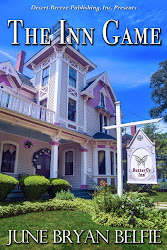